Month 1 of our Volkswagen Arteon long-term test review: the introductions

Volkswagen reckons it’s ‘an avant-garde gran turismo with svelte fastback styling’. My colleague Tim Pollard calls it a ‘coupaloon’ (and desecrates the English language in the process). And on our first trip out in the Arteon, I told my wife ‘It’s like an Audi A5 Sportback’ – which drew a blank look from someone already exasperated with my attempts to explain the visual differences between a Porsche Boxster and Porsche 911 Turbo Cabriolet.

The VW Arteon is actually a replacement for the old Passat CC – but don’t let that put you off. The current Passat is really rather good, and the Arteon wades into the much-diminished Mondeo market with bloody good looks, a wheelbase stretched to almost three metres, and all the interior quality and elitist appeal a German badge offers above its common-or-garden competitors.

Prices start at just over £31k for a 1.5-litre with 148bhp, and go up to 40 grand if you want an Arteon with four-wheel drive and a detuned Golf R engine. As much as we do, we’ve settled for a 2.0 turbocharged petrol (this is a post-Dieselgate world) putting 187bhp through the front wheels. With another £195 spent on VW’s ESP-based, diff-apeing XDS system, I tell myself it’s a stealth Golf GTI.

Except for the colour – that’s not stealthy at all. VW calls it Turmeric Yellow Metallic, a £595 extra which looks great on the Arteon’s chiselled lines – and unlike my old black Focus RS, I’ll never lose it in an underground car park.

The Focus RS – or more specifically, its appalling ride quality – is also the reason we’ve gone for Volkswagen’s £820 Dynamic Chassis Control, aka adaptive dampers that can cycle through Comfort, Normal and Sport modes. It’s familiar VW fare, but on the Arteon there’s now a Bentley-esque slider control so you can go even softer or even firmer. Currently I’m deep in the OAP end and so comfortable. 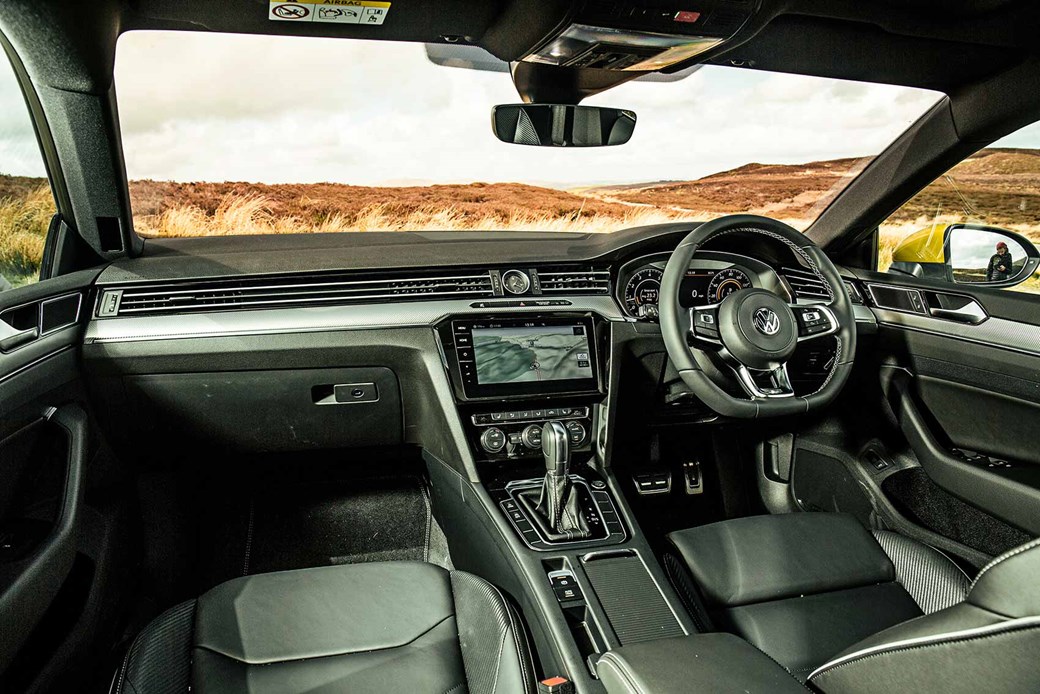 Ours is in R-Line spec, which means a beefier bodykit and inch-bigger alloys (now 19s), while inside there’s nappa leather. Although the wheelbase is not quite on a par with a Mercedes S-Class, it’s almost as roomy in reality. We’ve opted against 20-inch wheels, or spending four figures on a stereo upgrade, or adding any more safety tech, as the Arteon already has adaptive cruise control and lane assist. But we have spent £895 for VW’s top-notch 9.2-inch touchscreen, and £935 on a panoramic sunroof that disappointingly seems no bigger than any other sunroof.

We’ll get into the other options over the coming months, but for now it’s off to Wales. Had I still been in the Focus RS I’d have been dreading the 500-mile round trip but salivating at the prospect of a thrash through Snowdonia. This way around, I’ll enjoy the entire trip. I’m happy with that.

This book is about the tigers and their cute cubs. Tigers are famous in Asia and this author top rated essay writing service provides the adequate information about the tigers. The people who are interested in wildlife for them this book is so informative.